At the Electronic Entertainment Expo earlier this month, in the lobby of the Los Angeles Convention Center right beside the Starbucks booth and the endless line of bleary-eyed video-game-industry insiders, was a “pop-up” Drunken Clam. Staffing the pub, a feature of the animated television show Family Guy, was a bevy of attractive women dressed in pink tees and hats, barely resembling the character of Meg Griffin. 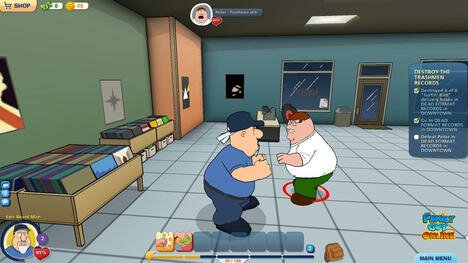 “They’re ‘hot Megs’,” Ian Verchere explained, pointing to a loud man wearing an even louder shirt, armed with a microphone and accosting passers-by with a boisterous “giggity-giggity”.

“And who would’ve thought we’d find a real-life Quagmire?” Verchere, the chief creative officer at Roadhouse Interactive—a Vancouver-based game-production company—added with a laugh.

A few weeks earlier, Verchere and president Tarrnie Williams—CEO James Hursthouse is the third cofounder—met with the Georgia Straight in Roadhouse’s small Gastown loft to talk about their first project, Family Guy Online. Launched on April 17, the free-to-play, browser-based game was created for 20th Century Fox. The Fox network has been advertising it during Sunday night broadcasts of the popular TV show. In light of the flood of fans wanting to create their own character and become a citizen of the imaginary town of Quahog, Verchere and Williams are proud that their game hasn’t crashed.

Between them, Verchere and Williams have some 40 years of experience working for Electronics Arts, Radical Entertainment, Relic Entertainment, and other game companies (“We’re so old school we’re new school,” Verchere joked). They helped build the industry during the golden era of the home console. But the industry is changing, and the two veterans are changing with it. Williams said they’ve had to do some learning, and the biggest lesson is that in the free-to-play space the game design and business model are inseparable.

According to Verchere, it’s a mistake to think of a free-to-play game as something that needs to be fully developed and then launched as a completed package. “With Family Guy Online, we got to what we considered a minimum awesome product,” he said. “It had to be stable, it couldn’t crash, it needed to be totally reflective of the show.”

via straight.com by Blaine Kyllo