There are many elements that have gone into making Carnage a reality and Carnage would be nothing without it’s talented Art Team. Today we’d like to introduce you to the creative heart of the game. Roadhouse Interactive has several artists on staff, many of which have helped to bring Carnage to life, but the five profiled below have been our rocks. 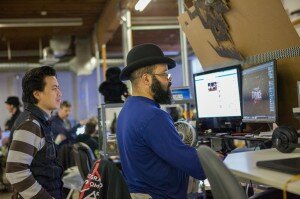 The Carnage Art Team is a diverse group that covers all the bases from concept to final design. Many of them are multi-talented such as our generalist/UI extraordinaire, Amar, and Irwan, whose many skills include illustration, graphic design UI and UX. 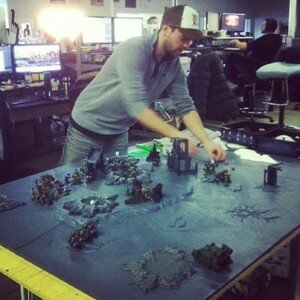 Chris, our art lead, heads the pack. For him, working on Carnage is a dream come true. Chris has been a fan of 40K for years, and began playing as a child. We have lots of his old models around the office and he has even introduced the uninitiated to the true 40K tabletop experience. 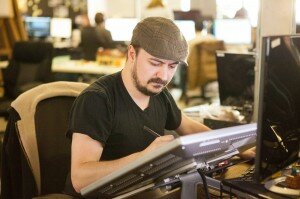 Rounding out our awesome team is the talented Ilya, our resident animator and concept artist, and Aaron, our visual effects ace. Aaron makes everything from bolter fire to gruesome blood splatter. He’s been getting really into it, and lately has been telling people that he kills orks for a living. Not a bad job if you ask us…

These are a few of their favourite things…

Working on a project as large as Carnage offers a wide variety of work, and it’s not surprising that everyone has their own favourite parts of working on the game. For llya, painting Carnage’s environments, creating the previously unseen world of Mithra, and exploring uncharted visual territory in the 40K universe is the ultimate perk.

As for Amar, his borderline unsettling obsession with Servo-skulls has led to the creation of some badass game interfaces. Aaron, on the other hand, is thrilled to be working on Carnage because it means working in one of his favourite genre’s: sidescrollers! His love for Castlevania and Metroid has made working on a project with similar mechanics an amazing experience.

And now, the most important question of all…

40K’s illustrious Space Marine Chapters have something for everyone. Chris’s long standing favourite is none other than the Dark Angels. And while Amar simply can’t choose which mighty Chapter he likes best, Ilya, Irwan and Aaron have all sided with the rebellious Space Wolves

That’s all for now. You’ll see the team’s work in action early this May. Until then, stay tuned for more awesome updates from the Carnage dev pit!