As the team at Roadhouse Interactive settles into our new space, we’re making some changes and adaptations. A big challenge is we’re not permitted to drill into the cinder block structure that forms the exterior walls. So, we came up with the idea of ‘friction’ fitting whiteboards into the columns supporting the big laminated beams that carry the roof load.

Like all Roadhouse projects, we like to get stuff up and running quickly. The pic below shows the SE corner of the studio, with the first ‘prototype’ whiteboard installed. It’s a proof=of-concept, and while it worked well enough, there’s always room to improve subsequent iterations. 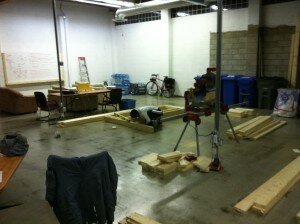 Taking what we learned from the prototype, a workflow was mapped out and a material list generated. Since 6 boards were being built, it made sense to bring in a compound miter saw, and to even build some jigs for cutting and drilling the Frost White Paneling from Home Depot.

Here’s a pic from the Home Depot in Vancouver of the stuff. It works great as whiteboard material. It doesn’t play well with Sharpies or chart markers. 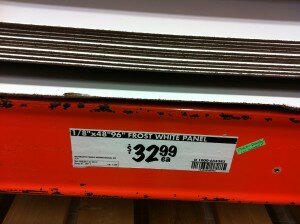 With all the material cut, the individual boards came together pretty fast. 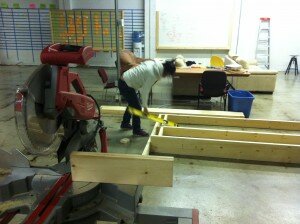 The prototype took about 2 hours, the first production board about 40 minutes, and by the end of the process, all of about 20 minutes each. With shopping for materials, logistics, sorting, cutting and layout, it’s fair to say that these averaged about an hour and twenty minutes each. Here’s the first two production models installed: 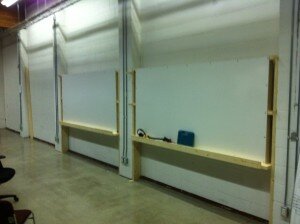 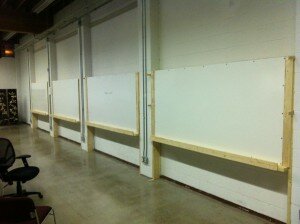 And above, the all four installed along the west wall of our studio. The bottom structure is a 2×10″ with a 1×4″ cap facing. This lets the structure double as a shelf for dry erase markers and erasers. It also fits a beer, an important component of any weekend construction project. 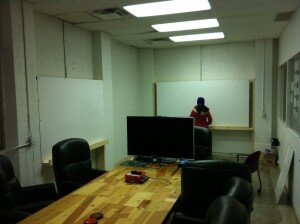 With the remaining materials, two more whiteboards were installed in our boardroom. The boardroom table is worth noting. It is one of a kind in that it was created by Cedric and Nathan Bomford as part of their Bamberton: Contested Spaces installation at Open Space in Victoria, BC. The look of the table, framing lumber off-cuts reconstituted into a table, helped shaped the decision to leave the structure of the whiteboards as unfinished framing lumber.

A final word on structure – these are obviously overbuilt, and could be done with 2×4’s instead of 2×6’s. However, because these are friction-fit and not fastened to the structure, the additional surface offered by the 2×6 provides more hold.

This project was both fun and functional. Monday morning, these were immediately put to use by the teams. Whiteboards really are an important point of the creative process, and there’s really no software substitute for gathering smart people together and working through  ideas. A special thanks to Germaine Koh for her help. The iterative process, prototyping and constructing useful things are keys aspects of her practice, and an especially large component of her current project, League.