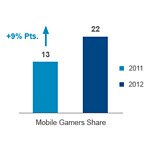 The number of people playing video games in the U.S. is declining due to shrinking audiences in every gamer segment except for mobile and downloadable/online, according to the NPD Group.

Gamer Segmentation 2012: The New Faces of Gamers, the market research firm’s latest report, estimates that 211.5 million people in the U.S. are playing video games in 2012 — that’s around two-thirds of the country’s population, but close to 12 million fewer (5 percent less) than in 2011.

However, the digital gamers (those playing downloadable and online titles) and mobile gamers segments grew significantly. The mobile category now makes up the largest out of all the groups, gaining 9 percentage points and taking 22 percent of the total share, edging out core console gamers.

NPD analyst Anita Frazier says these shifts in the gamer segments aren’t surprising, considering the longer life cycles of the current home console generation, and the increasing installed base of smartphones and tablets.

The changes come at a cost for the industry, though — NPD notes that core console gamers spent more on retail titles than any other segment in the last three months, an average of $65, compared to a $48 average across all game purchasers (and $16 for those buying digital titles).

via Gamasutra by By Eric Caoili